Background on the Taxonomy

In June 2020, the Sustainable Finance Taxonomy Regulation (“the Taxonomy”) was adopted by the European Parliament, establishing a classification system that purports to identify “environmentally sustainable economic activities.”[1] The Taxonomy will have a profound impact on private investment and the flow of trillions of dollars in capital. Under the Taxonomy, the European Commission will adopt a number of Delegated Regulations, the first of which relates to climate change mitigation and adaptation and was formally adopted in December 2021 (“the Delegated Regulation”).

According to the Taxonomy Regulation, the Delegated Regulation should only include economic activities which make a significant contribution to either climate change mitigation or adaptation while simultaneously doing no significant harm to any of the Taxonomy’s other environmental objectives (pollution prevention, biodiversity and ecosystem protection, the circular economy and protection of water resources). The goal of climate mitigation is linked explicitly to the Paris Agreement and its temperature goal of limiting global warming to 1.5°C by 2050.

Despite numerous legal, scientific, and procedural issues with the Delegated Regulation, the Commission has pushed forward with a system that greenwashes carbon pollution and damage to ecosystems, failing in our view to meet these strict requirements.

Our legal challenge to the European Commission

The Forest Litigation Collaborative (FLC), together with seven European NGOs and two teams of lawyers are taking advantage of new access to justice rules under the amended Aarhus Regulation[2] to ask the European Commission to review the Delegated Regulation and its attempt to greenwash environmentally harmful activities by labelling them as “sustainable” in the face of scientific evidence screaming otherwise. Our NGO partners in bringing this Request for Internal Review are Save Estonia’s Forests (Estonia), ROBIN WOOD (Germany), Clean Air Committee (Netherlands), Workshop for All Beings (Poland), ZERO (Portugal), 2Celsius (Romania), and Protect the Forest (Sweden).

In our Request for Internal Review (the first procedural step in this type of challenge), filed on 2 February 2022, we argue that the technical criteria established in the Delegated Regulation for forestry and woody biomass energy are in violation of international and European environmental law.

In particular, our request raises substantive and procedural issues with the Delegated Act, including:

Our Managing Lawyer, Elsie Blackshaw-Crosby, said, “Rather than giving investors assurance that their investments are genuinely ‘green’ and environmentally friendly, the Taxonomy has turned into a big greenwashing exercise. We believe that the criteria adopted for bioenergy and forestry are unlawful and we’re holding the EU to account.”

The Commission now has 16 weeks to respond to our request and if it is not granted, we plan to apply to the General Court of the European Court of Justice asking it to rule that in adopting the Delegated Regulation, the Commission has breached EU and international environmental law. If we succeed, the Commission will need to go back to the drawing board on its criteria for woody biomass energy and forestry activities, making them much tougher and potentially starting to turn the tide on the legislative acceptance of these activities as being part of the climate solution.

A further group of nearly 50 international NGOs have written to the European Commission confirming their support for our challenge.

Forestry and Bioenergy activities in the Delegated Regulation

Logging and burning forests for biomass energy, and forestry activities generally, are major sources of the CO2 that is warming the planet. Such activities are also responsible for increasing destruction of forest ecosystems. This is supported by scientific evidence: even the Joint Research Centre, the Commission’s own scientific research body, agrees and has warned about this in many published papers. However, instead of following the science and only including truly sustainable activities in the Delegated Regulation, the Commission seems to have prioritised political acceptability, writing in a letter to the expert group advising on the screening criteria “we must ensure that in addition to being science-based, the criteria are usable and politically acceptable”. 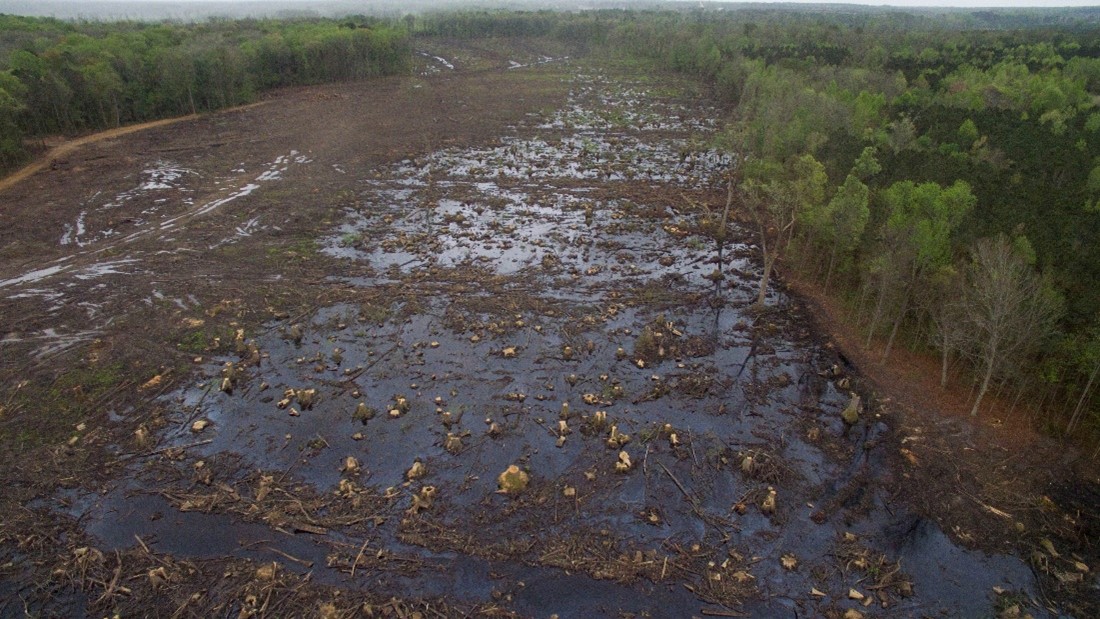 An example from North Carolina of clearcutting for biomass energy, an activity that is supported and greenlighted by the Delegated Regulation (Photo Credit: Dogwood Alliance)

For forestry activities to qualify as “sustainable” and be said to be making a significant contribution to climate mitigation, the Delegated Regulation criteria for forestry require only requires marginal reductions in carbon losses compared to “business as usual” scenarios. For biomass energy, the Taxonomy criteria are nearly identical to highly controversial sustainability criteria contained in the EU’s 2018 recast Renewable Energy Directive (RED II) – criteria so weak and unprotective, the Commission itself proposed to revise them in July 2021.

Referring to the RED II biomass criteria adopted into the Taxonomy, Dr. Mary Booth of the Partnership for Policy Integrity said, “The European Commission has thrown out scientific evidence in favor of financial tools that will prop up polluters at the planet’s expense. This is a cut and paste job from already-discredited criteria with zero legitimacy.”

The technical criteria set out for these activities fail to reach the goals binding the Commission in the Paris Agreement and the Taxonomy Regulation: avoiding climate catastrophe will require both sharply decreasing emissions and increasing carbon uptake from the atmosphere, with forests playing the biggest role.

This is why this legal challenge is so important: the Commission needs to be held accountable for its double standard in tackling the climate crisis. It cannot pat itself on the back for being an environmental champion, at the same time as legislating in a manner that throws scientific evidence out the window and opens the door to increased climate pollution and further exploitation of forests, with dire consequences for human health.

“Europe’s ‘green’ finance must not support forestry or bioenergy projects that harm ecosystems, increase risk of large forest fires and worsen climate change_,” said Nuno Forner, Policy Officer at ZERO (Portugal), which is one of the NGO plaintiffs. “_From reducing biodiversity to polluting the skies in cities like Fundão, we know these projects have devastating consequences_.”

With its potential profound impact on private investment, the Taxonomy must be better and must serve its initial goal: to actually fight corporate greenwashing. Instead, it is on the verge of becoming an exercise in political greenwashing, in a betrayal of public trust as we fight to overcome the dual climate and biodiversity crises.

Written by two of our lawyers, Catarina Prata and Elsie Blackshaw-Crosby who have been leading on this Request.

[1] For information on the Taxonomy Regulation and Delegated Acts, see https://ec.europa.eu/info/business-economy-euro/banking-and-finance/sustainable-finance/eu-taxonomy-sustainable-activities_en