In late October 2021, the Lifescape Project – as part of the Forest Litigation Collaborative with the Partnership for Policy Integrity – filed a complaint with the OECD’s UK ‘National Contact Point’ concerning public statements made by Drax Group Plc. The complaint was also supported by a group of NGOs from around the world including the RSPB, and focused on deeply misleading statements made by Drax about the green credentials of its woody biomass electricity generation operations in the UK.

From dirty coal to clean wood?

Drax used to burn coal to produce energy at its power station in Selby, North Yorkshire. From 2012, Drax began to shift to using woody biomass as its feedstock of choice. This involves burning a variety of wood products, including industry and forestry residues such as sawdust and branches – but also ‘roundwood’, which includes whole trees sourced mainly from the USA, Canada and Eastern Europe.

Drax – which produces around 6-7% of the UK’s electricity – describes its power plant at Selby as Europe’s ‘largest decarbonisation project’ and has made eye-catching public statements about the low-carbon impact of its biomass operations, claiming that it has reduced its carbon emissions by 90% since switching from burning coal to burning woody biomass.

The true position, however, is completely at odds with these public statements on Drax’s CO2 emissions and wider environmental impact.

The scientific evidence is clear: burning woody biomass in fact produces more CO2 per final unit of energy than burning coal. According to Ember, an energy think tank, far from being part of the climate solution, Drax is the UK’s largest single emitter of CO2 emissions and the EU’s third largest emitter. And yet, because woody biomass counts as a source of renewable energy – a separate issue which we’re also working to tackle – Drax benefits from enormous subsidies from the UK government: to the tune of £2.1 million per day.

The Organisation for Economic Co-operation and Development (OECD) maintains a set of Guidelines for Multinational Enterprises, setting international standards on responsible global business conduct, including in relation to the environment and consumer interests. The requirements for multinational businesses like Drax include providing the public with measurable and verifiable information on environmental impacts, providing accurate information that allows consumers to compare products and make informed decisions, and refraining from making misleading and fraudulent claims.

The Guidelines also provide for a complaints mechanism – a ‘National Contact Point’ (NCP) – to be established in each country which has adhered to the Guidelines, in order to consider and mediate complaints under the Guidelines, with a view to reaching mutual agreement between companies and complainants. Our complaint calls upon Drax to withdraw and cease making misleading public statements about the carbon emissions from its biomass generation operations and to commit to ensuring that future communications about carbon, biodiversity and the wider environmental impacts of its business are also truthful and not misleading.

The process is not judicial: the Forest Litigation Collaborative aren’t ‘suing’ Drax and the process is not legally binding. Instead, the procedure is a chance for the Forest Litigation Collaborative to draw the attention of the OECD and the public to this issue, to engage directly with Drax through mediation, and to obtain a determination of fact from the NCP on whether Drax have broken the Guidelines. 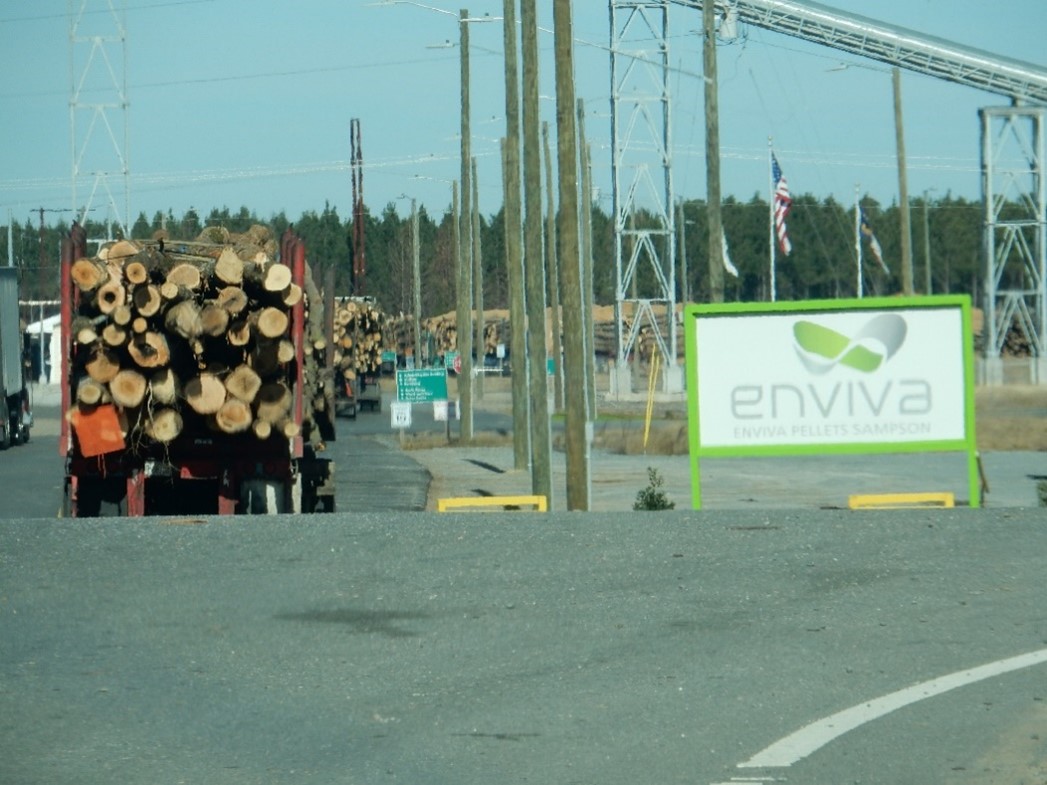 Drax claims publicly that its woody biomass energy generation operations are already effectively carbon neutral and have resulted in a 90% drop in emissions since 2012, when in fact the company is the UK’s largest single source of CO2 emissions. To make these claims add up, Drax relies on an array of arguments which are misleading and in breach of the OECD Guidelines.

Amongst Drax’s arguments are the following claims.

The treatment of woody biomass under UK regulations

Drax claims that the fact that the biogenic carbon emissions (i.e. emissions from burning wood) are treated as zero under UK regulations supports the company’s claim that its energy is effectively carbon neutral. It is on this basis that Drax calculates its emissions to have dropped by 90% compared to burning coal: the company simply doesn’t count any of the emissions being generated at the point when feedstocks are burned.

This regulatory framework stems from international rules under which emissions are counted in emissions figures for the forests where the biomass was sourced, meaning these biomass emissions can be counted as zero at the point of combustion. However, this does not mean that burning woody biomass in fact produces zero emissions and the IPCC – an expert UN panel on climate change – has explicitly warned against such a conclusion. Drax has failed to explain this openly and clearly to consumers who are left with the impression that Drax’s energy is in fact effectively carbon neutral.

Drax also claims that because the trees from which woody biomass was sourced absorbed CO2 when they grew, the CO2 emitted at the smokestack during burning can be treated as offset. Alternatively, the company claims that replanting trees can offset emissions.

These arguments not only contradict each other – why is there need to offset emissions with new tree growth if these have supposedly already been offset by previous tree growth? – but also fail to account for the urgent timelines the world faces in reaching Net Zero by 2050 – a key UK government policy backed by the IPCC. 29 years is simply not enough time to regrow mature, carbon-absorbing forests at the pace required to keep up with Drax’s smokestack emissions. In fact, studies show that forests can take decades to centuries even to regrow to the point where the net cumulative emissions released are the same as if fossil fuels had been burned instead. Accordingly, the company is discussing carbon offsetting on a totally inappropriate timescale that disregards the urgency of decarbonisation in a deeply misleading manner.

Bioenergy with carbon capture and storage

The company goes further than bold statements about carbon neutrality: by combining bioenergy generation with carbon capture and storage (BECCS), Drax claims it will become a “carbon negative” company by 2030. While carbon capture is part of the UK government’s industrial strategy for reaching Net Zero, installing BECCS technology at Selby is unlikely to turn Drax’s emissions negative. It is based on the assumption that biomass generation is already effectively carbon neutral; accordingly, carbon capture technology installed at Selby would result in carbon negativity, the company claims.

However, as set out above burning woody biomass is not in fact carbon neutral, and so installing BECCS is unlikely to lead to negative emissions. In addition, there are serious concerns about the efficacy of current carbon capture technology and the timescales for rollout of the entire capture-and-storage infrastructure, which indicate the grandiose and misleading nature of Drax’s claims about becoming the world’s first negative emissions power station by 2030.

In addition, in terms of the biodiversity impact of woody biomass operations, Drax denies that forest harvesting for its biomass causes significant harm to forest ecosystems. However, evidence collected by NGOs in the US and Canada indicates clear-cutting of whole trees for the biomass industry – including in wetland areas of the south-east USA and in British Columbia’s temperate rainforest, home to Southern Mountain caribou herds now at imminent risk of extinction. Although clear-cutting may not constitute deforestation – which has a very technical meaning requiring land use change – such activity turns biodiversity havens into ecological deserts overnight. In Estonia’s forests bird populations are declining at a rate of 50,000 pairs a year as old forest is felled, and often replanted with monoculture plantations. The photos included here show the impacts of harvesting woody biomass on forests in British Columbia and the south-eastern US. 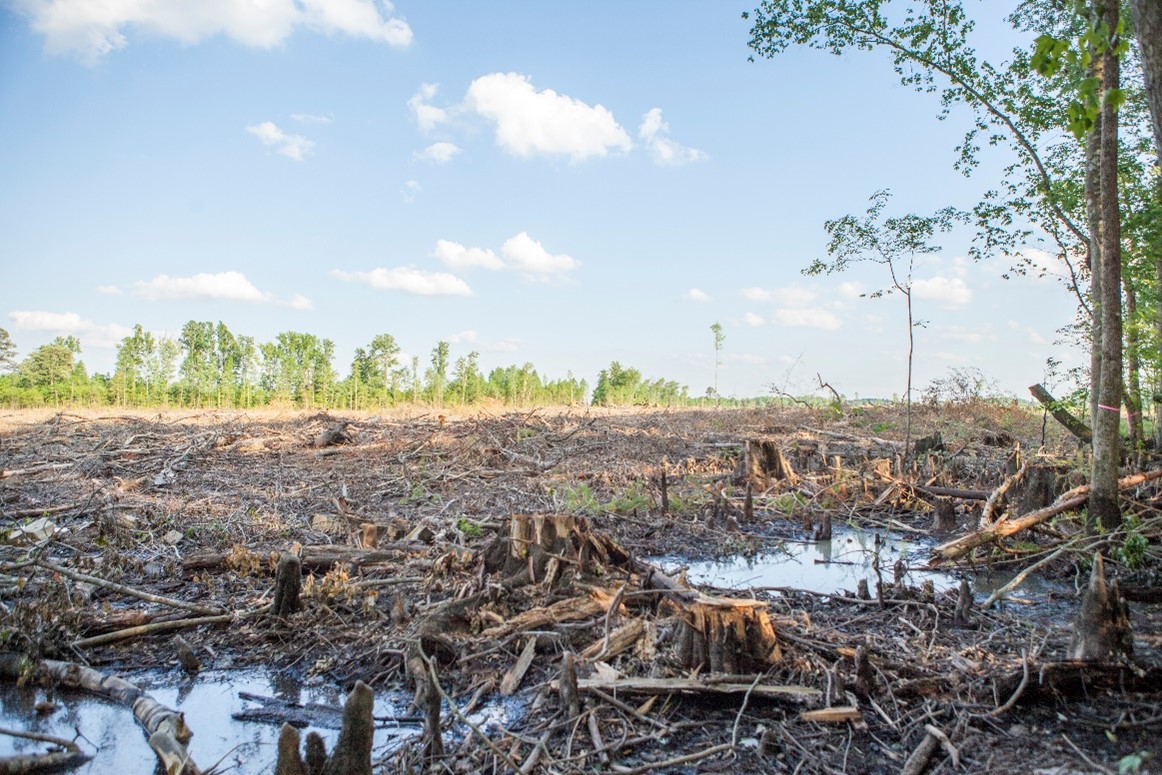 Photo showing a clearcut site in Potocasi Creek, which is a wetland and bottomland forested area near Woodland, North Carolina, 2015. The logging trucks carrying whole hardwood trees from this site were tracked back to the Enviva pelleting manufacturing facilities in Southampton and Ahoskie (Photo credit: Dogwood Alliance)

Drax will now have an opportunity to respond to our complaint. The NCP will then complete an initial assessment, indicating whether it considers the complaint to be bona fide, and will raise any issues relevant to the implementation of the Guidelines. If the complaint satisfies the NCP’s criteria, it will then offer to facilitate bilateral discussions between the parties in order to achieve a resolution to the issues raised in our complaint. 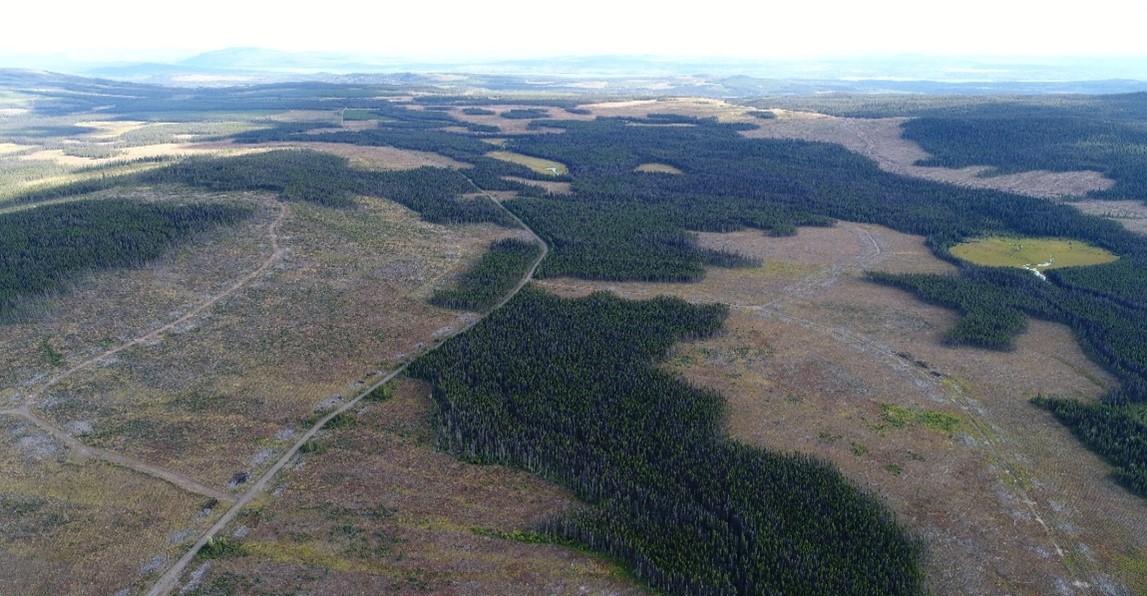 Follow us on Twitter and LinkedIn for updates on the complaint, and for more news on Lifescape’s biodiversity and rewilding projects.

Ed is currently an LLM student at the Geneva Academy of International Humanitarian Law and Human Rights in Geneva, where he focuses on non-state actors and the environment in international law. Previously, Ed worked in private legal practice in the UK for over 3 years, focusing on commercial litigation and Business & Human Rights. Ed played a key role in the research and drafting of the OECD complaint as a volunteer with The Lifescape Project.